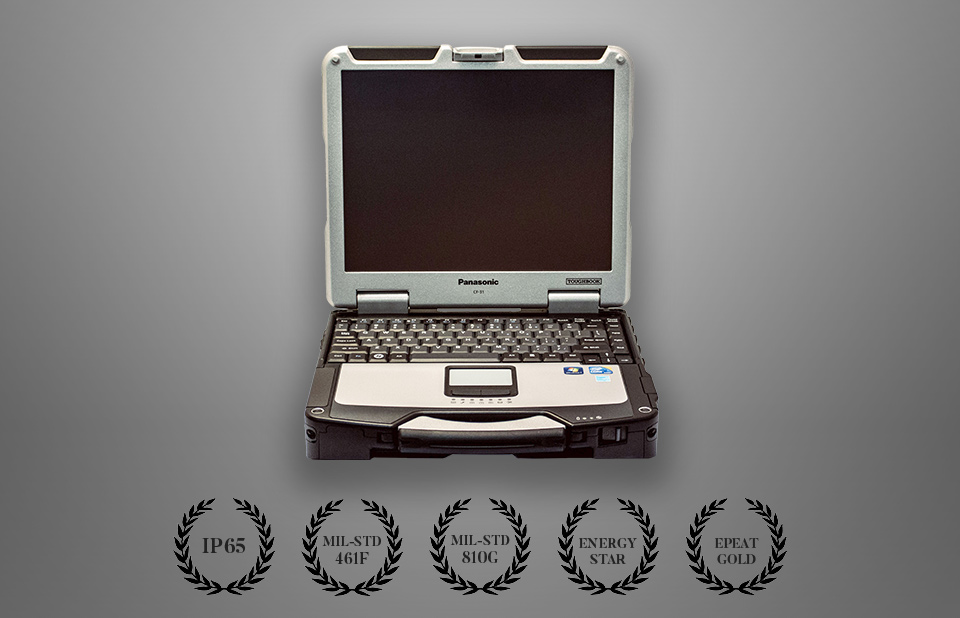 The Panasonic Toughbook line of rugged laptops has earned a lot of impressive looking certifications, but what do they all mean? For this article, we looked at the CF-31, but other  fully-rugged Toughbook models have similar credentials. Although we did our best to parse all the dense documentation in order to give you a clear, accurate picture, we will admit that we were not present for the testing (why would we be), we are not scientists, lab technicians, lawyers, astronauts, military officers, or anything but computer guys. We did our best, and we're pretty sure our information is accurate, but if you see something that you don't think is right, let us know in the comments. Additionally, these sections will be peppered with links to our sources, and at the end we'll include a list of citations, just like back in school.

Here's a list of some of the rugged certifications, awards, and flair the Toughbook 31 has earned. We'll give a brief explanation of all of them in the sections to follow:

(Fair warning: we're going to spend a disproportionate amount of time on this one, given that the MIL-STD-810G is an 800-page document encompassing a lot of different tests.)

Often cited and frequently misunderstood, the MIL-STD-810G is a United States Military Standard created by the Department of Defense to make sure equipment can withstand the harsh environments it would see in military applications.

Passing MIL-STD-810G testing sounds like a lofty accomplishment, but that is not always the case. In reality, it's a flexible standard. It doesn't set specific goals, strict parameters, or required results. Instead, it mainly serves as a collection of descriptions for how various tests should be conducted. Not every test will be relevant to every product, so not every test is expected to be performed. This leaves a lot of wiggle room. As a result, some manufacturers of "ruggedized" equipment use the standard as a marketing tactic without necessarily being able to back it up.

MIL-STD-810G compliance as a selling point is thrown around so often and with so little oversight that simply to say that a product is "MIL-STD-810G compliant" doesn't mean very much. In fact, it doesn't necessarily mean that an item has been tested — only that it was built with the military standard in mind. For a rugged computer, it's important to know which tests were performed, which parameters were met, and whether testing was performed in-house or by a qualified, disinterested third party.

If testing is done in-house, you're essentially just taking the company's word for it that the product meets a certain quality standard. The  documentation Panasonic provides comes with the following disclaimer at the top of the front page:

Testing is performed at an internationally recognized, independent research, engineering and evaluation laboratory who by contractual agreement with their clients does not allow the use of their name or logo because doing so may imply an endorsement of products or services. For this reason, all references to said independent third party lab have been removed. Should you require the full unedited version, please contact the company identified below.

Below that is basic information about Panasonic and the equipment tested. The report was written by Eric Dornes, Principal Engineer of Structural Dynamics and Product Assurance Section at this unnamed mystery laboratory. Armed with that information, it's a simple Google search to figure out which lab tested the Toughbook CF-31. We'll respect their contract with Panasonic and leave that information out, but suffice it to say that, if you so choose, you can find out for yourself that it is, indeed, a respected research lab.

The Panasonic Toughbook CF-31 passed tests for the following criteria.

Both procedures place the test item in a low-pressure chamber to replicate the conditions of a 15,000 foot altitude for a minimum of one hour. The difference between Procedure I and II is simply that they tested the Toughbook configured for storage/air transport and for operation/air carriage, respectively. In other words, they tested it both turned off and turned on.

Like the previous methods, Procedure I tests an item configured for storage and Procedure II tests it operating. Basically, this is inversely equivalent to the method for high temperatures. They stored the Toughbook at a temperature of -60 degrees Fahrenheit and operated it at -20 degrees.

The temperature shock test is used to find out how well a piece of equipment holds up to sudden changes in air temperature. The MIL-STD-810G document defines "sudden" as "an air temperature change greater than 10°C (18°F) within one minute." The Toughbook endured three cycles of 200°F to -60°F.

Procedure I is meant for items that will be used outside. It tests the item's ability to function unprotected in the rain. The CF-31 was sprayed with water for 30 minutes on each side, with conditions equivalent to 70mph wind and a rate of 5.8 inches of rain per hour. The unit was kept turned on and operating throughout the test.

Procedure III isn't too dramatic by comparison. It's meant to test items that are usually used inside, but might encounter dripping water from leaks or condensation. They let water drip on the Toughbook for 15 minutes. Big surprise: this did not destroy the computer. (Note: if you are wondering about Procedure II, it only applies to large, shelter-size items.)

Method 507.5 tests whether an item can be used in Florida. Or, you know, anywhere warm and humid, like rain forests, Southeast Asia or Florida. Procedure I, which wasn't used on the Toughbook, exposes the test material to natural humidity levels for long periods of time. Procedure II (Aggravated) is often a more practical alternative, exposing the test item to temperature and humidity levels that are more extreme than any conditions found in nature, but for a shorter duration. The test for Procedure II consists of a minimum of ten 24-hour cycles in which the temperature goes from 86°F to 140°F and the relative humidity stays at 95%.

Method 510.5 tests how well a piece of equipment can keep particles out of its business parts. Procedure I entails blowing small particles of dust (less than 150 micrometers) onto the item for six hours, then heating up the air to the high operating temperature from Method 501.5 (140°F, in case you haven't been keeping meticulous notes) and doing it again. Procedure II entails blowing larger particles of sand (150 – 850 micrometers) at wind speeds of 40 – 65 mph for 90 minutes on each side of the item. For Procedure II, the temperature is held at the high operating temperature throughout testing. For both procedures, the test item is left on and operating.

This one's used to make sure a piece of equipment can be used around fuel vapor without causing an explosion. There are a lot of complicated steps, but essentially, an explosive atmosphere is created in a chamber containing the test item. The test item has to perform various operational functions without sparking an explosion. We're not sure exactly what these operational functions are, but we like to imagine someone winning a game of Solitaire and triggering a massive, celebratory explosion. Of course, the Toughbook caused no such explosion, because it is safe. Oh, well.

Vibration is a really complicated, involved section of the MIL-STD-810G. On its own, it's 83 pages long. Before a device is tested, consideration is first given to what it will be exposed to in normal, real-world applications. Then, the test item is categorized accordingly and testing procedures are carried out to simulate the environment the item is is expected to encounter. The Toughbook CF-31 was tested under Category 24, General Minimal Integrity (Non-Operating), which is essentially the baseline vibration test.

Additionally, Panasonic set its own parameter in which a video had to play steadily while the laptop was subjected to vibration. To play a video, a computer needs constant access to the hard disk. Incidentally, hard disks are highly vulnerable to vibration.  Shaking the Toughbook while a video plays is the perfect way to ensure that the hard drive meets an incredibly high standard for reliability.

Procedure I tests an item's ability to withstand "functional shock." An apparatus subjects it to 40g. It's all very scientific, and essentially means that an item can handle the kind of shocks it might come across in normal operation. Procedure IV is more fun. That's the drop test. First, the Toughbook was dropped from a height of 48 inches onto a 2-inch-thick piece of plywood. Then they did that 25 additional times. Then, the same Toughbook was dropped from 60 inches high. Again, 26 times. Then, 72 inches. Again, same Toughbook. Again, 26 times.

A lot of civilian companies like to use the MIL-STD-461F because it sets the strictest standard, ensuring that the product will also comply with the FCC and standards in other countries. It's more practical to test a product for just the highest standard than to individually test it for each looser standard as well.

The CF-31 was tested in Panasonic's Research and Development facility in Japan and certified by a third party. According to our research, the third party appears to be the Kansai Electronic Industry Development Center, a research institute supported by Japan's Ministry of Economy, Trade and Industry.

This certification indicates the level of resistance to dust and water getting inside the unit's guts. The two digits following "IP" (Ingress Protection) represent the degree of protection against dust and water, respectively. The higher the number, the better. The Toughbook CF-31 is IP65 certified, meaning its solid particle (dust) protection gets a rating of 6 and its liquid ingress protection is rated a 5.


6 is the highest level of particle protection, which means the CF-31 is considered to be completely dust tight. A liquid ingress protection level of 5 means that the Toughbook was able to withstand a jet of water sprayed at it from every angle for a test duration of at least 15 minutes with no harmful effects to the unit. While liquid ingress protection certification goes up to a "9k" level (meaning an item is protected against close-range, high temperature, high pressure power washing), there is no rugged laptop we know of with a liquid protection level above 5. Several brands of so-called "fully-rugged" laptops have a rating of IP54.

Energy Star was developed in The United States in 1992 by the Environmental Protection Agency and the Department of Energy, but has since become a standard around the world. It's not an uncommon certification to have, but it is a worthwhile one.

While the criteria occasionally change, the general idea is appliances have to meet a certain standard for energy efficiency. The central requirement for computers to receive Energy Star qualification is that they pass a test to become 80 Plus Bronze certified. There's some math and complicated jargon you can look up if you want to, but the essence of it is this: a computer with 80 Plus certification has to be more than 80% efficient. That is, any energy it loses as heat has to amount to less than 20%. To be 80 Plus Bronze, a computer has to perform a little better than that. It gets complicated, but suffice it to say that a Toughbook is an efficient machine.

Both ISO  9001 and 14001 are management systems implemented in Panasonic's manufacturing plants. 9001 is a quality control system. Its efficacy is evidenced by the already established high quality of the products that roll off their assembly lines. ISO 14001 pertains to their environmental practices, which is great, but in buying refurbished you're doing even more for the environment by preventing functional equipment from going to waste.

In Europe, electronic equipment isn't allowed to contain any lead, so Panasonic went ahead and switched to lead-free solder for every component in every piece of equipment they manufacture, everywhere. It's the simplest and best solution.

Panasonic Toughbooks are built with accessibility in mind for people with disabilities. We see this in features like their touch screens and wheelchair mount capabilities. Panasonic actually worked directly with the Information Technology Industry Council in developing the  Section 508 "Buy Accessible" template.